Gorillas fart, get out of eating their veggies

Brussels sprouts taken off the menu of flatulent British gorillas.

From The London Paper:

Now the zoo has issued an apology after guests at the zoo expressed their horror at the potent smell that started emanating from the gorillas' enclosure.

Gorilla keeper Michael Rozzi said: "We feed the gorillas brussel sprouts during the winter because they are packed with vitamin C and have great nutritional benefits.

"Unfortunately, an embarrassing side effect is that it can cause bouts of flatulence in humans and animals alike.

"However, I don't think any of us were prepared for a smell that strong."

"They wedge their toes between the ribs. And scream."

This blog would not be complete without the internet classic, Dogs in Elk.

I did call my vet. He laughed until he was gagging and breathless. He says a lot of things, which can be summed as *what did you expect?* and *no, there is no such thing as too much elk meat for a dog.* 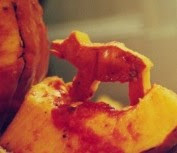 Here is the apotheosis of this legendary tale, glorified with illustrations created from pumpkin carvings. They have way too much fun there in the MIT Media Lab.

And here's a link to the original thread.
No comments:

Fame goes to your head, regardless of species


BEIJING (Reuters) – A pig that survived 36 days buried in the rubble of May's massive Sichuan earthquake has been voted China's favorite animal, but the attention has made him fat, lazy and bad-tempered, state media said.


"It's gotten fatter and lazier by the day," it quoted staff as saying... And the pig is getting fed up with visitors, after initially being quite friendly.

"Now it just blocks the door to its bedroom when there are too many visitors outside. It's been increasingly difficult for us to convince it to open the door," the report said.