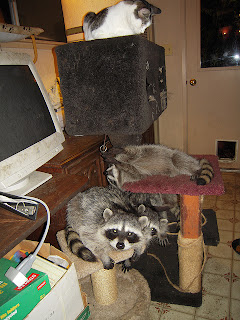 The start of spring has brought plenty of news of conventional sorts of raccoon trouble - a raccoon biting a child in New Jersey, a raccoon on a suicide mission causing a power failure in Wisconsin, a rabid raccoon attacking a cat in Maine, and a raccoon getting into a house in Kentucky by ripping a hole in a ceiling, to name a few.

In some cases, of course, we humans are just adding to the trouble. A police officer shot a sick raccoon in a ditch, and the bullet ricocheted and hit a woman in a nearby home. And then there was the woman who hit a raccoon while driving in Indiana: She lured it into her car with potato chips to take it for help, and when she ran out of chips, it turned on her, and she had to call 911.

But it's not violence and disease that's really the scariest thing about these animals. It's that they live among us, they have hands, and they are a little too clever for comfort. That's how you end up with a bunch of racccoons in Ohio trying to move in and live in school buses.

People, I can't emphasize this enough: There's a cure for rabies. But there's no way to be completely safe from an animal that can open doors and latches. 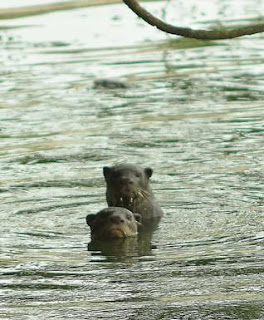 Sometimes I think there's nothing new left for bad animals to come up with, but this morning, three unexpected and awesome headlines prove me wrong:

Police 'looking for a horse' after hay and carrot thefts

Hay and carrot thefts have been on the up this month, prompting the police to urge vigilance from farmers and those living in rural areas around Penryn.

The most recent raid took place overnight last Tuesday (March 12), when 14 bales of hay, a welder, a disc cutter, various other power tools and a pressure washer were stolen from Tretheague Farm in Stithians.

This followed a similar attack overnight the previous Wednesday (March 5) when seven hay and straw bales, a sack of carrots and a wheelbarrow were pinched from a stables at Burnthouse, Penryn.

“I think we are looking for a horse,” said Detective Constable Rick Milburn from Falmouth Police Station.

“Anyone with any knowledge of anyone who has recently acquired a horse or is trying to establish a living space for a horse, we are asking them to contact us with any information.”

OK, apparently they expect the horse to have an accomplice, but still. It's nice to see some police with a clue about animals and their crimes for a change.

Some important evidence that owls are not as charming as they are in popular fiction comes out of British Columbia:

Somewhere in Beacon Hill Park, probably high in a tree, there’s a collection of hats.
A barred owl, swooping down on runners at dawn and dusk, has now collected at least three hats — and tugged at many more.

Cici Morgan, one of those who is now hatless, hopes the city will erect a sign in the Dallas Road and Cook Street area warning people.

“It is absolutely terrifying, and if someone had a heart condition or if it was a young child, I don’t know what would happen,” Morgan said, emphasizing she does not want any harm to come to the owl.

Sadly, officials are currently planning to do nothing about the problem, and the same is true in this story out of India which is a warning about another animal with an inexplicable cute reputation:

Otter attacks have left a village shivering in fear. People refuse to step into Mulavur canal in Payipra panchayat near Muvattupuzha where a few bathers were reportedly bitten by the carnivores.

Around 50 persons were bitten during the last six months, said a resident of the area. Four persons received animal bites the other day, spreading panic in the area. In another incident, the animals bit off the heel of a lady who stepped into the canal, he said.

One fisherman died in Chalakudi River three years ago following the carnivores’ attack.

Sadly, it appears that these people will continue to be at the mercy of these vicious predators. They're a protected species, and a wildlife expert essentially blames the victims, saying that the animals had probably been attracted by waste dumped in the river.

And the newspaper is no help at all. The ominous photo above is captioned with a quote from another wildlife official: Otters usually do not attack human beings as prey.

So good news, villagers: the otters aren't planning to completely devour you! I don't know about you, but somehow I don't think they find that much comfort. 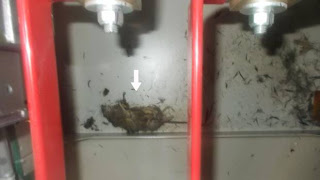 I usually refrain from posting photos of dead animals on this blog, but I am making an exception in this important case, because HOLY SHIT this dead rat almost caused a nuclear meltdown.

Perhaps I exaggerate slightly, but here's the deal: As you surely remember, a little over two years ago, an earthquake and tsunami hit the Fukushima nuclear power plant complex in Japan, causing meltdowns in several reactors, massive evacuations and abandonment of entire towns, and worldwide panic.

Everything's supposedly under control now... or it was till Monday, when a power failure caused cooling systems to shut down to three spent fuel rod pools. Investigations revealed the dead rat in the above picture  that apparently caused a short-circuit that shut the power off.

As is often the case, there's plenty of human blame to go around here as well. The power setup was described as a "makeshift" arrangement in the back of a truck that's been parked at the facility since May 2011. Allegedly it was planned to be permanently replaced at the end of the month, but in the meantime, Tepco power company officials admitted they'd never made any effort to keep wildlife away - in fact, the container around the switchboard has a half-open door around the cables that lead into it.

It's expected to take decades to fully decommission the plant and of course the leftover fuel will be dangerous for far longer. Let's hope the power company has learned its lesson and mounts some defenses against further animal incursions. Sure, in the end our species is probably our own worst enemy, but let's not actually make it easy for animals to get in on the game, OK? 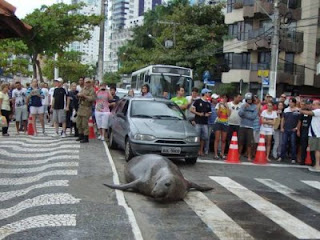 We are a bit under the weather here at Animals Behaving Badly Headquarters. Till normal service resumes we direct you to this story of a seal blocking traffic in Brazil on Nothing To Do With Arbroath.
No comments: 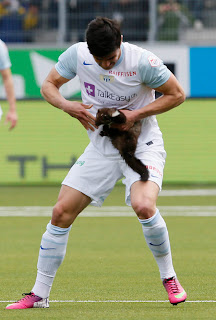 -The Internet blew up in the last fews days with reports of an escape of trainer killer Ukrainian military dolphins. Now they're saying this was a hoax based on false documents. But that's what they'd want you to believe, right? Read all about it here and decide for yourself.

-Elephant in Kerala charged with murder and released on bail. Seems like a bad idea to me.

-Excellent video of a pine marten disrupting a soccer match and biting the first guy brave enough to grab him. He was later captured by another player - I never knew that conveniently, someone on a soccer team wears bite-proof gloves.

Police dogs that don't know whose side they're on 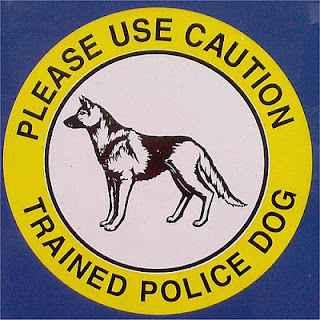 Everyone's impressed by highly trained working dogs. But here's something we never seem to think about: some people are better at their jobs than others.  And of course the same is true of dogs.

A police officer in Florida found this out last month when he was participating in a search for a suspect in the woods and a police dog bit him in the groin.

The officer was treated at a hospital and released (no word on the precise nature of any injuries). As for the dog, everyone made excuses for it. For instance:


Experts said a bite of this nature is not so much a mark of aggression as much as it is a sign of the dog's natural intensity in an active
search.

"One of the reasons we select them is (because) they are so intense," said Jan Scolfield of South Coast K9.

And in another article, the head of a police dog certification organization speculated that the dog may have thought his handler was being threatened, despite admitting that he wasn't aware of the specifics of the case.

Apparently it's just his job to make excuses for police dogs gone bad, which seems to be the routine response to incidents like this. In an earlier case in Las Vegas, a dog bit an officer during a chase after a suspect. They were forced to shoot the dog to get it to let go, after Tasering it failed to have any effect.

The dog was transported to an animal hospital where it underwent surgery, and his bosses planned no reprimand, because apparently this is just how it goes:


If Marco recovers, Cassell said there's no policy preventing him from returning to his K-9 duties.

"As long as the dog has no long-lasting side effects from the incident, I don't see anything that would prevent him coming back," he said. "Every police department in the U.S. has had K-9s at some point bite somebody that it shouldn't bite." 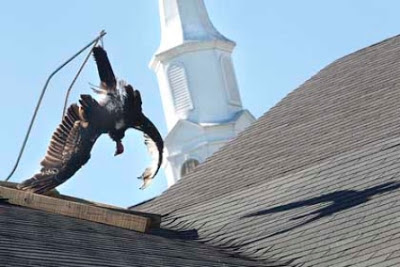 Don't you think it's been too long since we had a good story of people standing up to bad animals? Well here you go:


The vultures were circling a North Carolina church -- literally -- prompting members to commission a vulture effigy to scare the real birds away.

The strange tactic worked and the birds, which had been destroying the Bethlehem Baptist Church roof, now roost and eat elsewhere, The Daily News of Jacksonville, N.C. said Saturday.

"They were actually breaking pieces off the roof and eating it," church secretary Susie McBarn said. "That couldn't have been good for them."

The effigy, prepared by a taxidermist and installed by the U.S. Department of Agriculture, hangs upside down from the church's steeple.

One Extreme to the Other Linkarama

You can look at moving pictures and laugh, or you can read real science. Something for everyone!

- At Buzzfeed, Animals That Are Huge Jerks.

-Even better because continually added to: at Reddit, Animals Being Jerks.

-The incomparable Ed Yong explains why frogs don't care if they mate a female to death: because they still get to sire offspring anyway.

-Cute meerkats use subordinate animals to test out threats, like making them go first when crossing a road.

-How cheating monkeys hide their affairs from their mates.  You have to wonder what this kind of work does to a scientist's mind: