Bug got your tongue?

We don't usually cover the world of parasites on this blog. Certainly, living inside another animal's body without permission is, at minimum, rude. But parasites are so disgusting, really, they seem like an easy mark.

However, a creature that's been going round the internet lately takes rude parasitism to such a level that I cannot ignore it. It is so disgusting that I'm putting the photo at the bottom of this post so if you're squeamish, I warn you, don't scroll down.

The creature is an isopod, which is normally a kind of crustacean that's inoffensive and sometimes even cute. Those roly-poly potato bugs are isopods:

And isn't this T-shirt illustration of the more awful giant isopod funny? 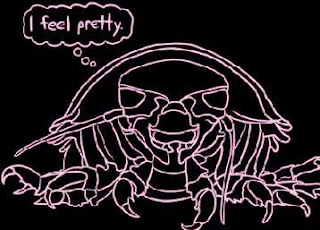 OK, we're just postponing the inevitable, a creature which the BBC describes as "A rare parasite which burrows into host fish before eating and replacing their tongues with itself."

Yes, it EATS the TONGUE of the living fish and then LIVES there in place of it. And the marine biologist who found a specimen off the Jersey coast calls it:

"Really quite large, really quite hideous - if you turn it over its got dozens of these really sharp, nasty claws underneath and I thought 'that's a bit of a nasty beast'.

This inexcusable behavior yields the situation in the following photo (and don't say I didn't warn you): 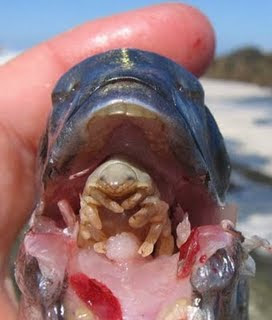 By the way, Americans, don't feel like you're safe because this was found in Britain (where earlier specimens were found in fish bought in fish markets, quite a lovely surprise at dinnertime no doubt.) In fact, the reason British biologists were so excited about this find is that normal habitat of this creature is the coast of California.


Roly-poly pillbug from Wikipedia; despite searching, I'm unable to credit the horrific photo of the tongue-eating monster, possibly because no one wants to admit being responsible for such a hideous, awful thing.