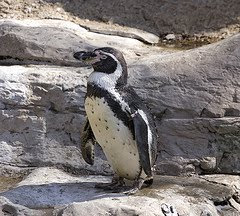 And just missing the event... Last week was the American Library Association's Banned Books Week, and the winner of the honor as most banned book last year was And Tango Makes Three, a picture book about the famous gay penguin family in New York's Central Park, mentioned in this post.

The ALA says that banning requests are often due to objections to 'positive portrayals of homosexuality.' Such a ridiculous thing to object to about penguins when they have so many real flaws, such as being unsupportive to their handicapped spouses when parenting and when their relationships, gay and straight, are worthy of soap opera.

Find some more banned books to read - we may be a week late but apparently they never go out of style - including one about a fictional gay guinea pig couple, at the Banned Books website.


Another penguin from birdman Misterqueue.