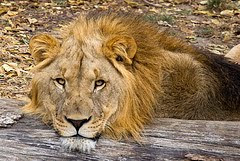 A fantasy commonly repeated by the bunnyhugging peacenik type is that humans are the only animal to wage war.

In this month's Smithsonian magazine, this myth takes another hit in an article by Abigail Tucker about the work of lion researcher George Packer.

Scientists used to believe that prides—groups of a few to more than a dozen related females typically guarded by two or more males—were organized for hunting. Other aspects of the communal lifestyle—the animals’ affinity for napping in giant piles and even nursing each others’ young—were idealized as poignant examples of animal-kingdom altruism.

But Packer and his collaborators have found that a pride isn’t formed primarily for catching dinner or sharing parenting chores or cuddling. The lions’ natural world—their behavior, their complex communities, their evolution—is shaped by one brutal, overarching force, what Packer calls “the dreadful enemy.”

One typical lion battle strategy is particularly charming. A coalition of males who don't have a pride will try to take one over by driving off or killing the resident males. Then, if they're successful, they kill all the pride's cubs in order to breed with the females. Sure, what's a little infanticide when you've got such a noble reputation to hide behind?

Packer has found that the communal nurseries exist not because lions have socialist utopian childrearing ideals, but because lionnesses that raise their cubs together can better defend them from these takeover attempts.

Lions have other flaws as well, one being that they are extremely lazy. Packer's very first research conclusion was that they were "really boring."

The laziest of all the cats, they were usually collapsed in a stupor, as if they had just run a marathon, when in reality they hadn’t moved a muscle in 12 hours.

And if you haven't already had enough of your illusions smashed about these supposedly brave beasts, you might want to know what else they're afraid of aside from each other:

Earlier I had asked what kind of anti-lion gear the researchers carried. “An umbrella,” Jansson said. Apparently, lions don’t like umbrellas, particularly if they’re painted with large pairs of eyes.

Lion too lazy to even hold its head up, by MisterQueue.