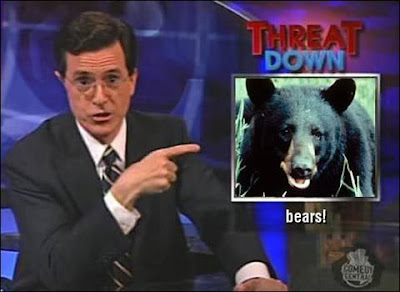 A few recent stories with some important information on how to - or how not to - defend yourself against animal attack:

-If you don't want to be attacked by lions, note the following:

Read more details at Not Exactly Rocket Science, or else just stay the heck indoors.

-If you want to defend yourself against bears, don't believe what you read in the paper:

A recent attack by a grizzly on a group of teens in Alaska was reported by reputable news outlets under headlines like "Teen Survives Bear Attack by Kicking." Um, not so much. Read a useful analysis of the media misconceptions at the Alaska Dispatch, and also this piece on how a gun won't help you either. Or just stay indoors.

-If you want to defend yourself against wild pigs, don't bother trying to shoot them:

Rural New York state is fighting a losing battle against wild boars. Suspected of escaping from game farms, they've established wild populations, and have been reported chasing people, attacking livestock and killing at least one dog.

Wild pigs can be devastating to the environment (check out the story we linked to in February from Smithsonian Magazine about the havoc being wrought by feral pigs in Texas). They're also a danger to people, a fact well known in Germany, as we've mentioned before (and which we go report in more detail in the book coming out in the fall. Hey, did you see that pre-order link over there on the right?).

The most frightening part of the news out of New York state, though, is the difficulty of defending ourselves against these super-swine: