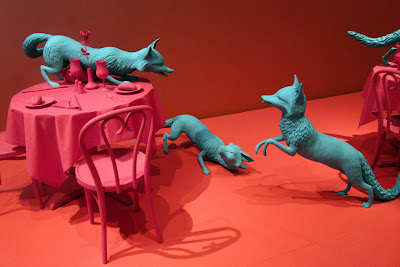 Animal muggers don't only pick on someone their own size:

A fully-grown man has told how he was mugged by a fox, which cornered him and forced him into handing over his dinner. .. The wily fox, which had been sitting on a kerb at the side of the road, followed him into an alleyway... The aggressive animal leapt at him, circling him like prey and trying to snatch his shopping bag.

Despite making attempts to escape, the fox persisted and carried out a sustained attack on the food he had just bought from Tesco.

Eventually, Mr Baker claims, he resorted to offering the animal his loaf of garlic bread and the fox scampered off.

-Animals aren't concerned about their carbon footprint: in England, a town blames seagulls for keeping their streetlights on 24 hours a day:

Council chiefs in Brighton, East Sussex, say that the light-sensitive photocell mechanism on top of the lamps is being blocked by the birds’ droppings, fooling the system into thinking that it is permanently night time.

-I don't know exactly what's going on here but it's definitely bad behavior:

After two unexpected pregnancies at a sanctuary for retired research chimpanzees, other female chimps have been put on birth control and the males are getting a new round of vasectomies.

The pregnancy at Chimp Haven, opened in 2005 near Shreveport, was discovered on Valentine's Day when a worker noticed Flora, a 29-year-old chimp, carrying a newborn.

An ultrasound Friday confirmed 49-year-old Ginger also was pregnant and due in late July or early August, Brent said.

Every male gets a vasectomy before being sent to Chimp Haven because there's a surplus of captive chimpanzees.

Artist Sandy Skoglund imagines the next nightmarish step in the fox takeover of our prepared food establishments, photographed by Flickr user wallyg.