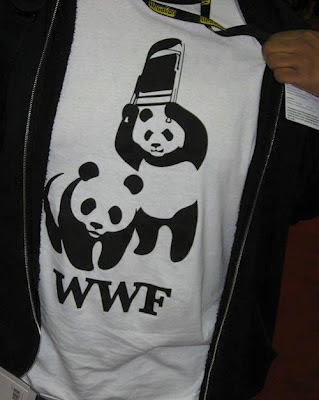 The goal of this blog is to unmask the secrets of cute animals and reveal how they cloud men's (and women's) minds. And there's no animal that does a better job of that than the panda.

Millions of dollars are spent on conserving this animal that scientists admit is basically crummy. People want baby pandas so badly that they're willing to humiliate themselves to help them reproduce. And zoos have even gone so far as to silence other animals' expressions of dissent against the panda-industrial complex.

Frankly, I'm so tired of fighting this battle that I can only be pleased by recent news of a plan to exploit this ridiculous obsession. An entrepreneur in China is growing tea organically fertilized by panda poop, and he's going to milk idiot panda-lovers for every last cent he can:

Most people use about three grams per cup, meaning each one brewed would set one back over £130.

That's about 200 US dollars at current exchange rates.

There must be some reader of this blog with the business sense to jump on this and import the stuff. After all, nothing else seems to be working to get the economy going again. If there's a chance we can pull this country out of a recession by standing on the backs of panda-lovers, there is nothing that would please me more.


In the meantime, contribute to economic activity by buying that bad panda t-shirt here.

Email ThisBlogThis!Share to TwitterShare to FacebookShare to Pinterest
Labels: panda