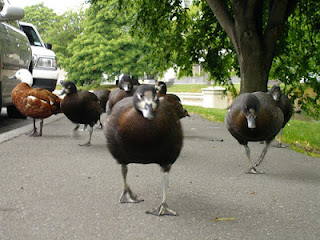 A bunch of birds who were no doubt hoping to fly under my radar while I was away:

Cardozo managed to call for help on her cell phone. She can be heard on the 911 tape saying: “I was attacked by a duck! I am bleeding like a stuck pig on both of my legs.”


A Paignton woman is getting a bit teed off after gulls have taken to dropping plastic practice golf balls on her living room roof.

She said: "It all started a few months back at the start of the fine weather. I was sitting in my living room one evening when I heard something land on the roof and then roll down and into the back yard."

Tony Whitehead, RSPB spokesman, said: "What you will often see at the seaside with gulls is that they use a similar method to this to open mussels.

"They carry them up into the air and drop them to crack them open. This sort of behaviour is quite well known in gulls, they are very clever creatures. They probably see the balls as potential food, but then gulls see most things as potential food."


And we'll end with this headline of one win in the battle against bad animals:


Thanks for keeping up with these to the always interesting Nothing to Do with Arbroath, which is always on the case with weird animal (and other) news.