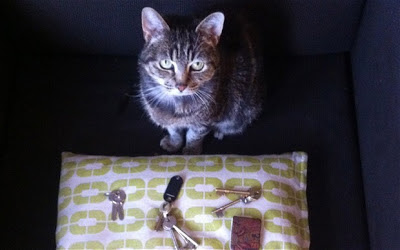 As longtime readers of this blog know, there's nothing new about cats roaming neighborhoods, stealing things.

But a cat in England recently added a new technological twist to this. A spate of missing keys in a neighborhood in London turned out not to be an epidemic of contagious forgetfulness, but the work of a cat named Milo who wore a magnetic collar.

The collar was designed to open a cat door, but Milo's owner discovered that she had found another use for it when she caught the cat arriving home with a set of keys dangling from her collar.


She found 12 sets of keys in her back garden and eight dotted around her home – as well as another six sets which were found in neighbour's gardens after they dropped off Milo's collar as she prowled through their gardens.

She said she had also found dozens of metal items scattered around her house, including nails, pins, screws and bolts.

The cat's owner says that "luckily neighbours have seen the funny side of it," but it's sobering to think of what a less ethical cat owner could do with the idea. However, anyone in England thinking of enlisting a cat as a partner in crime should think twice. Not only are cats untrustworthy, it's possible that police are cracking down: in Kent, two officers were recently sent to investigate a cat that stole a roast chicken from a neighbor's kitchen.

The incident has raised controversy amid claims that the cost of dispatching the officers on such a case added up to £2,000.  But the victim says that this was "the tip of the iceberg" of a long string of offenses and the chicken was merely "the last straw."

And a police spokesperson defended the response:


"The caller raised issues to do with a cat but also ongoing concerns for her quality of life."

As a cat owner myself, I know exactly what they mean.