Let's go ahead and make it Bad Animal Science Week 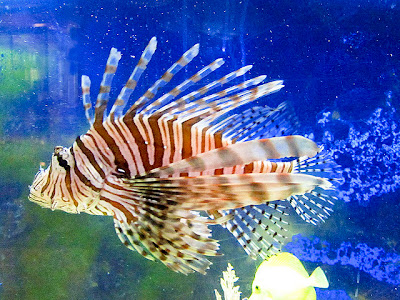 -How did I miss this? Photos of cute animals make people aggressive:


New research finds that seemingly strange aggressive responses to cuteness are actually the norm.
In fact, people not only verbalize these aggressive desires with phrases like, "I just want to squeeze something!" they also really do act them out. In the study... researchers found that people watching a slideshow of adorable pictures popped more bubbles on a sheet of bubble wrap than did people viewing funny or neutral pictures.

- We've noted before that the problem of invasive lionfish is so bad that scientists are suggesting we eat them, and even providing recipes.  Here's an interesting long article on how bad the problem is, starting with a dissection that reveals just how much native ocean wildlife these lionfish are eating: they're so obese that they've got liver damage:


Though lionfish can go weeks between meals, when they don’t have to, they won’t. Scientists have observed lionfish eating at a rate of one to two fish per minute, and their stomachs can expand 30 times their size to accommodate lots of food. To become obese, fish eat upward of 7.5 times their normal dietary intake, which means the abundant North Caroline lionfish could be eating as much as 7,000 pounds of prime North Carolina seafood per acre every year.

-Some actually useful bad animal science: What would you do if you were attacked by a bear? Have you been told that you should lie still and play dead? Apparently that's not good advice if the bear is actually trying to eat you:


Because in that circumstance, the bear just keeps on chewing.

Not exactly what you were hoping for, right? So you might want to read this article and this interview   and learn how to tell the difference between when to play dead and when to up and punch the bear like this guy did.