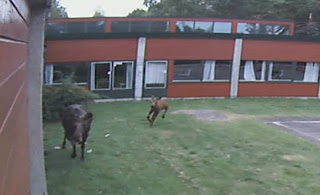 In China, alcohol with a viper in it is used as a medicinal drink. But if you're not careful, it can end you up in the hospital instead of keeping you out of it:


When the bottle ran dry the woman opened the top to pour in more alcohol. As she did so the snake suddenly started breathing and wriggling, and sprung out of the bottle. The viper bit the woman on her finger as she tried to swat it away.


Our janitor he came to school and he saw a broken door," Solveig Eid, the headmistress of Risil School, told The Local."He thought that some children or teenagers had been having a party or whatever and had broken the glass."

It was only when he went to check the school's security video that he identified the true culprits.


"I tried to shoo it away but it just kept going for me and going for me. This went on for about an hour or so. It just kept trying to bite me. It was horrible and my ankle is painful to walk on."

The ferret was finally lured into a box with a piece of ham, but also bit the officer who came to take it into custody. It's now at an animal shelter, where they say:


"Owing to his temperament, we'll probably be looking for someone experienced in ferret care."