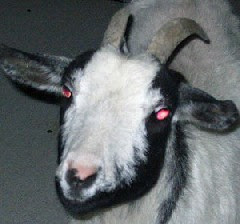 DES MOINES, Iowa, Jan. 14 (UPI) -- Firefighters say a cat is the hero and a goat is the goat in a house fire that destroyed an Iowa home this week.

The blaze in Warren County was believed to have been started by a goat that knocked over a space heater in an attached shed Tuesday and it might have proved deadly had the family cat not awakened the sleeping residents.

"My cat woke me up and I saw smoke coming out of my fan," John

Hadley told KCCI-TV, Des Moines. I made sure I got her (Hadley's mother) out and then I know she loves her animals, so I rounded all her animals up, and by that point, flames and smoke were everywhere."

Hadley and the other two people in the house had to wait in freezing cold for firefighters to arrive from several miles away. Officials told KCCI there wasn't much they could do by the time they were on scene.


(Goat with evil eyes from photo by Flickr user Mofute)