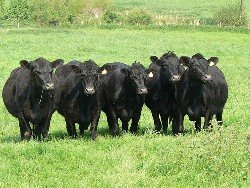 BOULDER, Colo. — A cow charged a woman on the South Boulder Creek Trail on Monday afternoon, knocking her down, officials said.

The woman was riding her bike on the trail when she encountered the cow, and she stopped to let the animal pass, said Pete Taylor, a ranger for Boulder Open Space and Mountain Parks. The cow knocked the woman over and walked on her legs, he said...

She didn’t appear to do anything to provoke the animal, which witnesses said appeared to have an injured leg, he said. The cow had left the scene by the time rangers arrived, but hikers coming down the trail were warning others about the rogue bovine...

Jason Vogel, vice president of the Boulder Mountain Bike Alliance, called Monday's attack "odd, rare and random" and said he hasn’t heard of any other cows going after cyclists. It’s not even common to come across cows on the trails, he said, though they often can be seen nearby.

"It’s not something people should be concerned about," he said.

Huh. Easy for Mr Vogel to say. (Should we think twice about taking cow advice from someone whose name means 'bird'?)