Science filling in the details of bad animal behavior 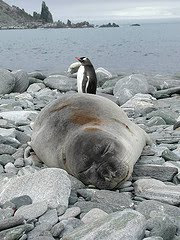 If you think bad animal behavior is just a lark, suitable for blogging and a laugh, you're wrong. It's a serious scientific pursuit. I may get nothing out of this business, but some South African researchers lately got an actual publication out of it: a report in the Journal of Ethology about a seal trying to rape a penguin.

As the BBC reports:

The brazenness of the seal's behaviour left those who saw it in no doubt as to what was happening.

(Researchers) De Bruyn and a colleague were on Trypot beach at Marion Island to study elephant seals when they noticed a young, adult male Antarctic fur seal, in good condition, attempting to copulate with an adult king penguin of unknown sex.

The 100kg seal first subdued the 15kg penguin by lying on it.

The penguin flapped its flippers and attempted to stand and escape - but to no avail.

The seal then alternated between resting on the penguin, and thrusting its pelvis, trying to insert itself, unsuccessfully.

You have to give credit to both the scientists and the BBC for having a much more realistic view of animal behavior than most. They don't express surprise at the mere fact of attempted animal sexual assault, which we've seen on this blog with animals as varied as frogs and dolphins:

Sexual coercion among animals is extremely common: males of many species often harass, coerce or force females of their own kind to mate, while animals are also known occasionally to harass sexually a member of a closely related species.

They even realize that these incidents aren't confined to members of the same species - as we've seen, again, with dolphins and with a parrot who've had humans as the objects of their attentions. So, the researchers are quite precise about what's unusual about this incident:

But this is thought to be the first recorded example of a mammal trying to have sex with a member of another class of vertebrate, such as a bird, fish, reptile, or amphibian.

This is what is comes down to: bad animal sexual behavior is so widespread, you've got to get that specific to get a scientific "first" out of it.

The researchers consider various possible motives for the behavior, from aggression to playfulness. But if it was a misdirected attempt at cross-order romance, he's definitely doing it wrong:

After 45 minutes the seal gave up, swam into the water and then completely ignored the bird it had just assaulted.

Really, at least send flowers - or some fish - if you're not going to call, you know?


You can read the whole article here, if you're into that sort of thing.

Thanks to Sir Pilkington's weirdimals Twitter for the tip. Photo of a different unnatural arrangement of a seal and a penguin by Flickr user shaindlin.