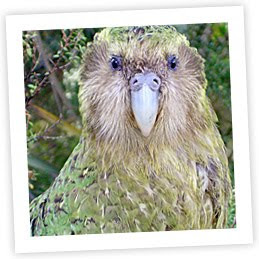 As we have seen again and again, it's no wonder animals keep acting the way they do when people so often actually reward them for their bad behavior. In perhaps the most fantastic example so far, a parrot in New Zealand has been given a prominent government job in response to his worldwide fame - as a pervert.

A kakopo named Sirocco, member of a highly endangered New Zealand species, became an internet sensation due to a video clip in which he pleasured himself upon the head of naturalist Mark Carwardine, who was filming a TV series based on his book with the late Douglas Adams. (In case you haven't already seen this clip, you can click here. Or, more tastefully, not.)

Now, this perverted kakapo has been appointed official government "spokesbird" for conservation. The prime minister says of the bird:

“He’s very media-savvy, he’s got a worldwide fan base – they hang on every squawk that comes out of his beak. He’ll be a great official spokesbird for New Zealand,” he said.“Sirocco can speak very loudly on this topic and by the end of this campaign people will be a lot more aware of what’s going on.”

I am appalled by the precedent that has been set here. Now that birds know that this is how to get ahead... well, for one thing, I think I'm going to start wearing a hat.