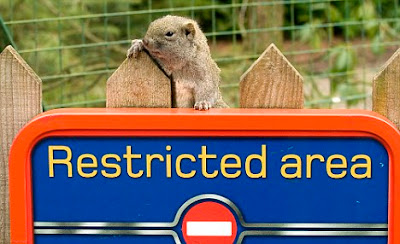 So many of the humans in the stories reported in this blog just don't get it. Again and again, we've seen people make excuses for animals or, worse, even enable them.

So it's a pleasure to recognize a couple of true role models in the fight against bad animal behavior.

In the first case, a squirrel was put in its place when it was banned from riding a rollercoaster in England.

Workers noticed it riding the revamped Sonic Spinball roller coaster as it was tested in the mornings and joining visitors who were offered an early go on it before the official opening.

The grey-haired animal was also caught stealing food from the workers.

A spokesman for the Staffordshire theme park said: "It was getting in the way of builders who were painting. They couldn't carry on because they would end up with paw prints in the paint."

Alarms were installed that emit a warning noise inaudible to human ears but designed to ensure the squirrel, nicknamed Sonic, avoids the ride in future.

I'm sure we can all agree that that's the sort of thing we want to see more of. But even more impressive is the case of a woman who was attacked by a shark while snorkling and escaped by punching it.

"And then it got me under the water, but not much because I started kicking at its neck."

She lost quite a lot of blood and is going to have to undergo a number of surgeries, but the woman sees a bright side. Apparently there are unanticipated rewards for those who stand up to bad animals:

"I have to have a new remodelled bottom, so that's a positive," she said.

Photo of that stinking scofflaw squirrel from The Mail.