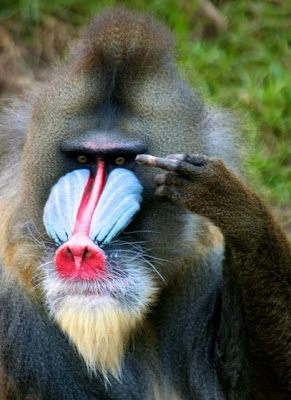 -President Obama is scheduled to visit India next week. Whereever a world leader goes there are security issues, but in India, humans are not the only primate that are a potential problem. The Telegraph reports:

Delhi's police are to build 30-feet towers in jungle surrounding President Obama's hotel to protect him from terrorist attacks during next week's visit, and also shield from an invasion by the city's most persistent threat – monkeys.

They have been asked to erect 'machan' towers for elite commandos who will use powerful searchlights and night-sight binoculars to lookout for suspicious movement and any signs of a simian invasion.

- There's no mention of another monkey control method sometimes used in India, and perhaps for good reason. At the Commonwealth Games earlier this fall, a squad of trained anti-monkey monkeys was deployed. But apparently hiring standards are not rigorous enough to screen out thugs who abuse their power: One tried to steal a BBC reporter's phone, sending him to the hospital for treatment of a wound and rabies and tetanus shots. And they're no more reliable with the locals: recently in one neighborhood, the langur monkey brought in to protect people from monkey attacks didn't exactly solve the problem when it bit one of the residents.

-Elsewhere, a repeat offender is caught in Croatia:

This Macaque ape made a monkey of zoo security when he was caught slipping out of his cage to raid local gardens for tasty snacks.

Keen veg grower Zdenek Lounovi, 70, could barely believe his eyes when he looked down his back lawn and saw the beast munching on his rhubarb and turnips.

...Keepers at nearby Olomouc Zoo admitted the ape was theirs and set up a hidden camera in his enclosure to check how he had been getting out.

"He was pretty sneaky. He'd pulled part of his fence away and covered the hole with a board so he could come and go as he pleased."

- And finally, the photo above was taken by a tourist as he was being insulted by a mandrill called Jackson at the San Francisco Zoo. Zoo authorities explained that the monkey did not mean to be rude, that the gesture was merely the result of "a form of arthritis."