What evil lurks beneath that placid bovine exterior? 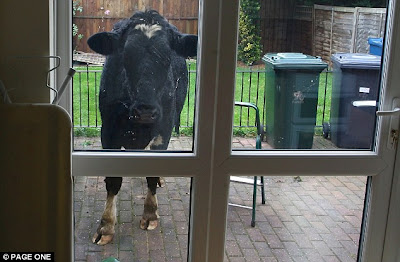 Police had to catch an unusual suspect on the run after a cow broke out of its field, charging through fences of three back gardens before it was finally cornered.

Nottinghamshire police said it was "extremely lucky" nobody was injured after the cow escaped from a field in Bassingfield yesterday and went on an hour-long rampage.

The animal broke through an electric fence at about 12.30pm and got on to the A52, heading towards West Bridgford, police said.

Officers tried to corner the cow but it charged at them, causing one to "take evasive action" to avoid injury.

It then smashed through fences behind three properties in Eltham Road where it was finally cornered and calmed down by police and put into a trailer by the farmer at about 1.35pm.

The Daily Mail quoted the woman who came face to face with the bovine in the photo above:

'I was in my kitchen when I spotted this thing crashing through my garden fence.

'It came right up to the kitchen window and was breathing on the glass. I was scared as I thought it was going to smash its way into the house - you could tell it was really angry.'

A cow running loose may seem like a joke, but don't be too quick to laugh. A report by the Centers for Disease Control indicates that cattle cause about twenty deaths a year in the United States. And their in-depth look at a few of these contains some alarming details:

- In about 3/4 of the cases "the animal was deemed to have purposefully struck the victim."

- One of the murderous bulls had been hand-raised and bottle-fed by the victim and his family.

- And finally, watch your back: in at least one case, the victim was attacked from behind.