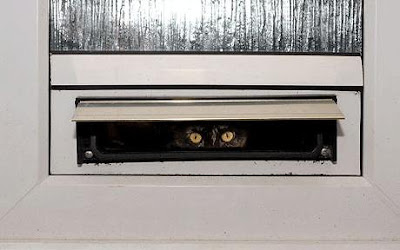 Cats appear strangely infrequently on this blog. Given how many of them there are and how closely they live with us, you'd expect to see reports of their misbehavior frequently. Is it possible that they're actually a creature that's less troublesome than average?

Recently two different stories of feline misbehavior came to this blog's attention and started a train of thought that suggests otherwise.

In the first, in New Zealand, a cat actually managed to delay train service, a pretty impressive accomplishment for a small animal:

New Zealand railway officials said a train was delayed for half an hour due to injuries the driver sustained from a confrontation with a stowaway cat....

The cat is believed to have hopped aboard the train at the Wairarapa station and was discovered when the train stopped at Wellington station.

The train driver attempted to catch the feline in a box but wound up with scratches that required bandages. The train was delayed while a replacement driver was located.

In the second, in England, a family has been threatened with loss of mail delivery service because their cat scratched the postman.

The home has a mail slot through the door, about six inches from the ground, the perfect height for a cat entertainment device, if by "entertainment" you mean sticking your claws out and slashing at anything that comes near.

The owners poo-pooed the risk posed by their the cat Lana, who their children playfully call Lana Banana. "She's really docile, I can pick her up like a baby and she won't bat an eyelid," said their mother, and insisted that the cat had just been "playful" when it swiped at the mail carrier's hand as he was pushing mail through the slot.

Now, you may laugh at this story. After all, it's funny because this never happens - isn't it dogs that are supposed to attack the postman?

Well, not so fast. Back in the spring, this blog made brief mention of another English cat whose behavior actually did result in mail delivery being stopped to his owners' residence.

Tiger's owner also poo-pooed the authorities' excessive reaction to reports that he attacked mail carriers as they approached the door and chased them down the path. "Tiger is 19 years old, he dribbles when he sleeps and snores - he sleeps for 20 hours a day," she scoffed.

One case of a cat attacking a mailman, fine, but two? In fact, in the story of Lana, a Royal Mail spokesman was quoted as follows: "Unfortunately, animal attacks are a hazard faced by our employees and we record around 5,000 animal attacks a year on our postmen and women."

It was clearly time for this blog to research this situation further. Come back on Thursday to see what we dug up on this previously unnoticed feline menace.