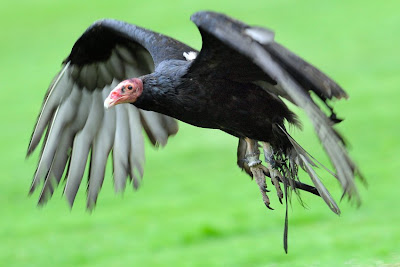 -Vacation dangers: In the seaside town of Bridlington, England, seagulls that hang out at fish and chip shops aren't just waiting for partrons to drop a chip on the sidewalk anymore. They're actually attacking and stealing their food. One shop fears being driven out of business due to the cost of replacing the meals of complaning customers.

-Memorable final performance: At the Taronga Zoo in Australia, an eagle at a free-flight performance took a detour and landed on an toddler in the audience, leaving a gash on the boy's head. Understandly unhappy with this bit of improvisation, the zoo has retired the eagle from show business.

-Useless public servants: Some more birds are bad at their jobs in Germany as well, where a program to train vultures to replace dogs for sniffing out dead bodies has been declared a "disaster." Critics of the scheme had earlier pointed out the possibility that the evidence would disappear down the birds' gullets, but it turned out there was no risk of that: The three vultures failed to find any of the test cadavers. One refused to fly at all, waddling like a duck instead, and the other two did nothing but fight. A trainer admitted:

'They don't seem to be able to do anything other than attack each other.... It seems they are rather cowardly birds - they would rather hide in the woods than be out and about in the open.'