Read it for the sake of the children 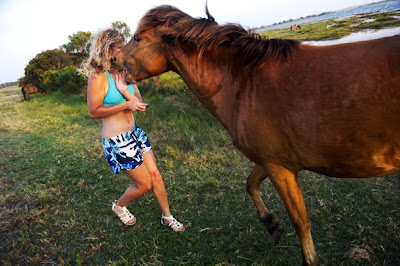 The newspaper of our nation's capitol, the Washington Post, has a lot to answer for. They never pass up an opportunity to give cute animals more good publicity, in the particular form of the pandas at the National Zoo. They waste valuable space on these inert fluffy bamboo-eaters even when there is no news at all. It boggles the mind that in a city crowded with the powerful and with world-changing events, the headline "Panda pregnancy? No one knows" passes muster.

So it's with particular pleasure that I direct you to a hard-hitting piece of investigative journalism in the pages of the Post this past weekend. This is not only a case of exposing bad animal behavior, but of tearing down one of those dangerous illusions propagated by children's literature.

If you remember the book Misty of Chincoteague with nostalgia, if like many you've dreamed of someday visiting the wild ponies of Assateague Island, you'll want to read this article, which begins:

ASSATEAGUE ISLAND NATIONAL SEASHORE, Md. — They scarf potato chips and whole bags of marshmallows late in the night, leaving behind trashed campsites and ruined tents. They break into stranger’s coolers and make off with watermelons. They carelessly turn on water spigots and leave them running.

Rangers are dealing with a problem that has all the hallmarks of a classic beach-week bender, but the culprits aren’t rowdy teens. They’re Assateague Island’s famous wild horses.

Apparently the ponies have been pestering visitors for years, requiring a volunteer patrol to shoo them off the roads. But lately the situation has crossed the line. One stallion even had to be removed from the park after injuring a visitor.

Of course, foolish humans who don't read this blog are a big part of the problem. New signs have been posted - “Horses, Bite, Kick & Charge/KEEP AT LEAST 10 FEET AWAY” - and a fine of one hundred dollars instituted for violators. But many visitors don't get it - park officials have seen parents putting their children on the back of a pony for a snapshot.

Humans don't bear all the blame, though. These creatures are so bold that you could easily find yourself within ten feet of a pony through no fault of your own - and end up like the woman in the photo above who was knocked to the ground despite attempting to make a quick retreat. And these icons of children's literature have started stooping to the lowest of tricks:

The horses beg. They pester. They even run a hustle that wouldn’t be out of place on a D.C. street corner.

“I didn’t believe it until I saw it,” Kicklighter said. “Two horses put their youngest, cutest pony in front of a car, and then the older horses went around to the windows to panhandle for food.”

Email ThisBlogThis!Share to TwitterShare to FacebookShare to Pinterest
Labels: horse