Cuteness is only skin deep 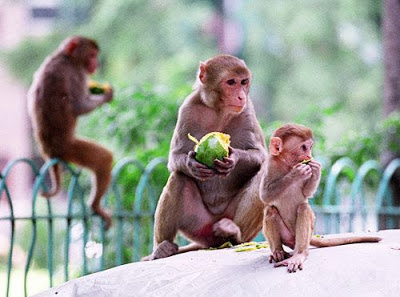 In another story of authorities who are helpless to deal with bad animals, officials at a train station in India are appealing for help to solve their monkey problem.


"There were just a couple of monkeys initially. Their mischief on the platform was initially ignored. But then there was quite a proliferation of them. And now, after a few months, we have about 15 monkeys. And they have become quite a nuisance," said an official at the railway station.

There's nothing the monkeys don't want. "They don't hesitate to snatch mobile phones from passengers. They snatch food items, bags and other luggage," the harried official said.

Sounding like he was almost a little in awe of the simian troupe, the officer said: "They are an intelligent bunch. It is almost as if they understand announcements on the platforms. Soon as an announcement goes out on the public address system, they appear on the platform ready to snatch what they can find."

Their efforts to evict the primates have been fruitless, and wildlife officials have been no help. So they have been reduced to offering a reward to anyone who can come up with a solution.

I came across this story at the excellent Nothing to Do with Arbroath, and I often think I could just stop writing this blog and direct you all there for your weekly diet of bad animal news. But the reason I always decide against it is a telling one. To get your bad animal news there you have to scroll through the bad human news. Sure, the stories are amusing - it's the illustrations that are unpleasant: 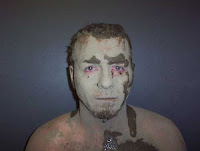 Compare that mugshot with the one of the monkeys above, and is it any wonder why animals get away with what they do?