Ferrets lying in wait for their chance 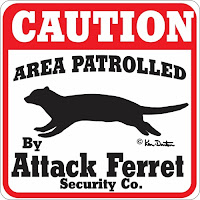 In all the years of this blog, the only crime committed by a ferret has been getting on a train without paying the fare. But you should not let that sort of thing lull you into a false sense of security regarding any particular species of animal. It's probably only a matter of time. And indeed it was in this case, as shown by this story out of England:

Florence Taylor, 86, was on her way to the shops when the animal jumped into the scooter.

It bit her leg and hung on with its teeth piercing her flesh.

Mrs Taylor forced the ferret off, with the help of a neighbour, by beating it with her walking stick, but she was left in agony.

She said the animal was hanging on to her leg for several minutes.

The grandmother of ten, from Bingham, said: "Both of us were trying to knock it off but I could see its teeth hanging on.

"It was a traumatic experience."

She said: "My shoe was full of blood. It was very scary – I didn't know what to do."

After her daughter arrived and dressed the injury, the pensioner went to her GP where she was given a tetanus injection and a course of antibiotics.

Typically, supposed experts expressed shock at the attack. A local man with two pet ferrets said they were in their cages at the time, and it couldn't have been them anyway, as they are "quite friendly," although another source admitted such behavior was not totally unheard-of:


Ferrets have a reputation as pleasant creatures. Andy Handley , chairman of the British Ferret Club, said: "It's not something I have come across often. They only bite generally if they are frightened. If they do bite because they are scared they will sink their teeth in and stay locked on."

And as we often see, authorities refused to step up to punish the criminal....

...leaving the innocent and frail elderly to deal with this terror on their own:


Mrs Taylor, whose husband died 26 years ago, was unable to walk for several days. She said: "I do all my own shopping and usually go round to a friend's every morning but I haven't been able to since.

She added: "I will definitely be wary when I do go out."