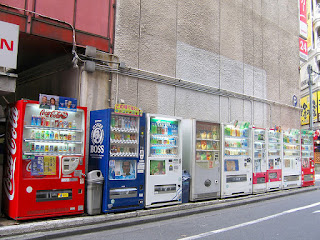 There are any number of bad animals I should be catching up with today. But pigeons stopping mail delivery with their poop and yet another attack turkey are simply going to have to stand aside in favor of a creature attacking one of the things I hold most dear: Japanese vending machines.

The photo above is a scene that looks remarkable to an American - that fact is demonstrated by how many of them take such photos - but it is an utterly typical Tokyo streetcorner. The country is a paradise of interesting drinks, in reasonable portions, available without even going into a store.

And now this convenient, simple pleasure is under attack:

According to the public health department at the Fukuoka Municipal Government, at about 12:30 p.m. on Jan. 21, the man bought a canned coffee from a vending machine near a parking lot in Maizuru Park. When he pulled his hand from a slot of the vending machine, the spider crawled up through his right sleeve and bit his forearm, it said. About two hours later he called for an ambulance because he started to feel acute pain and nausea.

Yes, statistically it's true that vending machines themselves are more dangerous than animals. You're far more likely to be killed by an accident with a vending machine than by a shark.

But if we can't get a can of iced coffee from a Japanese vending machine without fear of spider attack, now I truly don't know what the world is coming to.