Support from the mainstream media 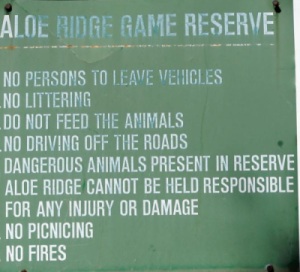 Again and again this blog has demonstrated that the only thing less trustworthy than an animal is one of those alleged animal "experts". If you don't believe me, maybe you'll believe the world's largest news organization:


JOHANNESBURG (AP) — When do you not listen to the African wildlife expert? When he tells you to stand closer to the rhino.

That suggestion by a South African game park owner resulted in serious injuries to a 24-year-old woman from Johannesburg.

The Beeld newspaper reported Tuesday that Chantal Beyer said the game park owner snapped pictures and suggested that she "stand just a little bit closer" seconds before the attack. Photos show Beyer and her husband only feet away from two rhinos.

The paper said that just after the photo was snapped, the rhino attacked, and its horn penetrated Beyers' chest from behind, resulting in a collapsed lung and broken ribs, the paper said. The Aloe Ridge Hotel and Nature Reserve, where the incident took place, declined to comment Tuesday.

And here is the saddest part: if you trust Google Translate, Volksblad reports that "some of the people said they would rather prefer to stay in the vehicle, but Richter told them it's perfectly safe."

People: trust your instincts. These are individuals who have chosen to spend their whole lives with animals. Don't assume that they have a particle of common sense - or that they're on your side.

Photo of sign missing the most important caveat from Volksblad.