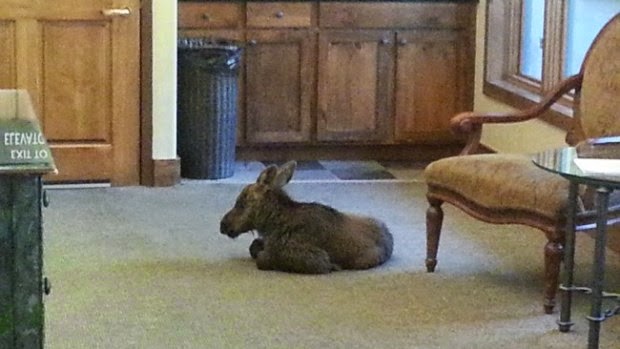 
Conference Services Manager Katie Nelson said it stayed in the lobby about 10 to 20 minutes, lying on the floor. She said it's a pet-friendly hotel and thought at first it was a dog that had gotten off its leash.

"I heard my name called out from the shop and I ran out the door to see a guy getting pulled into the water," Reynolds said, describing the attack. "It was like watching a horror film."

Reynolds said Cavanaugh was able to get to his feet and approach the dock, but the beaver would not let go of him, so Reynolds hit the beaver with a nearby paddle several times.

"The paddle broke and the beaver let go," he said. "He kind of disappeared for a few seconds but came back up so I hit him again."

A black bear caused a commotion at the NIH campus in Bethesda, Maryland, a close-in DC suburb that is definitely NOT out in the country and is way too close for comfort to Animals Behaving Badly Headquarters.  During the chase the bear taunted NIH employees on Twitter:

Sometimes late at night, I sneak into your lab and recalibrate your instruments. Nobody suspects the bear.

When you're done with the monkeys, do you just throw them away? Because, I could totally go for some monkey.