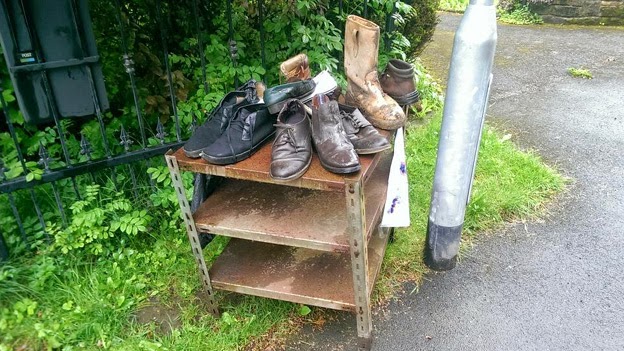 Some things never get old, and two of them are vulpine shoe-stealing and dogs driving cars (badly).


A fox is stealing dozens of shoes in a Leeds suburb and dumping them outside a woman's house.

The problem has become so bad that Elaine Hewitt has been forced to put a shoe rack outside her home in Horsforth so neighbours can reclaim their missing footwear.

Ms Hewitt said the vulpine crimewave began a few months ago when she found a single shoe in her back garden.

The fox is now leaving a shoe a day, ranging from sandals to work boots.

Ms Hewitt, who has seen the fox carrying shoes, said the animal favoured leather footwear and the shoes are not chewed or damaged.

"First of all we just collected them thinking they were too good to throw in the bin," she said. "We had a few phone calls from that and were able to give back and match up a couple of pairs.

"Then I decided the fox was a further afield than just around our immediate vicinity which is when I decided to put the table out on the street.

"The number of vehicles and passers-by who stopped to ask about it, to look and also to take their shoes back was absolutely astounding."

The fox appears to be the mother of five cubs and Ms Hewitt said she hoped the younger members of the family would not be taught about the shoe stealing habit.


Costello says it all started after he'd taken this normally frisky puppy for a walk by Bolivar Pond in Canton. He hopped into his car, and started it up, but Rosie had her own ideas.

"The dog jumped in and hit the gear shift and the car jerked and she fell on top of the gas pedal," Costello said. "It was just scary."

Then, he said, his puppy drove the car into the pond.

"[The] car was right here you can see the tracks," Costello said.

The 911 call even surprised Canton police.

"I've never heard of a puppy driving a car into a pond," said Officer Robert Quirk of the Canton police.

Despite the dangerous struggle required to save Rosie from the sinking vehicle, as usual, no one seems to blame the dog:


Canton police posted this lighthearted tweet, with a picture of the pup and a caption that read, "Perp says she was just going with the flow of traffic."

And Hermann says it's a day he won't soon forget.

"I work a lot of weekends and none as exciting as this one," he said.

As for Costello, the car - his daughter's - is a total a loss, but he says he has insurance. As for Rosie - she's ok - and unaware of all the commotion she caused Sunday.