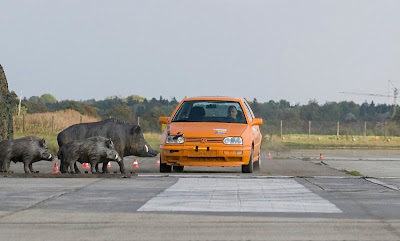 Despite the fact that dogs love to go for a ride in a car, animals and vehicles are not a good mix. Spring is a particularly bad time of year, when the weather warms up and all kinds of creatures start to dash around, so involved in looking for fresh food and other animals to have sex with that they don't bother to look both ways before crossing the street.

Big wild animals are the most familiar risk. In Maine, authorities are urging motorists to slow down and look for moose, which have already caused at least one highway fatality. "Moose is Maine's most deadly animal," said one official.

But all kinds of animals can cause these problems. Not all are wild: a wandering cow sent two people to the hospital after collisions in Texas. And some are not large at all: a highway in Greece was shut down when millions of frogs crossing it were causing cars to slide off the road.

Elsewhere, officials are doing more than just talk to convince drivers of the danger. In Germany, they've staged crash tests with the model wild boars in the photo above, and the result might convince some drivers to forget about driving and take the train: 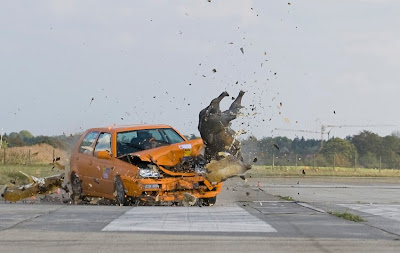 But why are we the only ones getting the warnings? 27 humans died and 3,000 were injured in 2009 in Germany, but also, "hundreds of thousands" of animals. Animals can't read the newspaper, but something needs to be done to make them look around and take notice - why isn't someone laminating those photos and passing them around some forests?