In California, a win: Just making the local news now is a victory back in March, when Santa Cruz county animal services finally caught a stray dog they called Highway Man.

When drivers reported the dog hanging out near a highway exit, authorities feared he'd cause accidents by getting into traffic. It was the start of an extended battle.

"We literally went out there 80 times," [field supervisor] Stosuy said. "All I ever saw of him was his butt because every time he would just run away."

On five to 10 occasions, California Highway Patrol shut down the highway for 10 minutes at a time as Animal Services tried to catch Highway Man.

"He ingested tranquilizers, but didn't go down," Stosuy said. "It was pretty intense. We finally camouflaged the trap so well that it looked like a cave. We rubbed it down with lamb's neck so he could get the scent.

"We finally trapped him on March 31. We weren't ready to give up, but we were starting to think that we would never get this dog."

And what was Highway Man trying so hard to avoid? See the photo above. He's now lying on a comfy blanket in a nice foster home, waiting to be adopted. 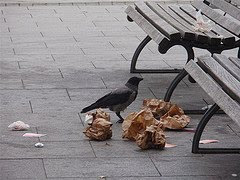 In Berlin, a draw: May is crow attack season in the German city. Chicks of the hooded crow begin to leave the nest, and mother crows aggressively "protect" them from innocent passerby who are perceived as threats:

The tabloid Berliner Kurier on Wednesday reported that a cyclist near the Stasi archives was bloodied and needed medical attention after a crow attack. "It was like a Hitchcock horror film," one bystander told the paper. "They simply pecked away! And their beaks aren't so small either."

Of course, as usual, some make excuses, such as the head of a conservation organization:

The strikes vary in scope from threatening dive-bombs to full-on pecking blitzes. But Sorges says that often, too much are made of the attacks. "The attacks are more of a terror and shock for people than they are dangerous," Sorges says. "If a crow does make contact, the injuries are minimal, but nasty scrapes and blood make the attacks look more dramatic than they really are."

Police are swinging into action this year, Der Spiegel reports - but unfortuately their efforts are not too impressive:

Officials have put up red and white tape around the entrance and exit to a central-Berlin parking lot at the archives of the former East German Secret Police, the Stasi, in central Berlin. The area has the look of a crime scene.

A sign at a nearby crosswalk gives notice to pedestrians: "Warning: Aggressive Crows."

(And they litter, too - photo of crow taking trash out of a bin in Berlin by Flickr user colinruminant.)