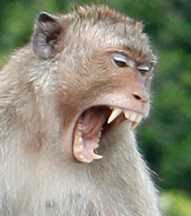 Here's a warning to us all: the story of a British woman with a phobia of monkeys who couldn't leave well enough alone.

Her fear went back to when her father raised a chimpanzee, an animal she described as "positively evil." With more close-up and personal experience of non-human primates than most people, you'd think she'd realize that her fears were pretty rational, right?

But no. She decided to go on a trip to Thailand, to tour an island full of macaques and "confront her fears." Here's what happened, as reported in The Daily Mail:

After arriving on the beach, she decided to sit down and take in her surroundings.

'I thought I was heading for safety under this rock in the shade, only to cool down. I laid the towel down and there were no monkeys in sight,' said Mrs Darwell.

'The next thing I noticed, this monkey walked up next to me and I thought, "Oh dear". I began to stand up to move away.

'Then, the monkey took my wrist and pounced on my right arm, sinking his teeth in and hung off it.'

He wouldn't let go; he was locked on. I was absolutely petrified. I was shaking from head to foot and I froze,' she said.

'Then another, bigger monkey bit my arm, just next to the other one biting me, and all of a sudden I was surrounded by monkeys.'

She said three or four of the creatures began attacking her from all sides, grabbing her arms, legs and rear end, leaving bruises all over her body.

Of course, if she'd read this blog, she'd know that macaques don't care for tourists and are just as horrible to the locals even in places where they treat them like gods. So what did she expect?

As you can see from the photos in the linked story, the woman seems to have recovered nicely, looking fairly cheerful in a brightly colored sundress despite her bandaged arms. Let's hope she's learned her lesson.


Macaque picture from Sky News. See the teeth? If you live in a nice safe country where these guys do not roam free, have the sense to count your blessings instead of purposely travelling to a place where they do!