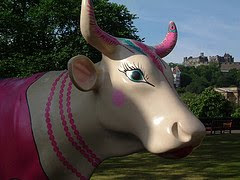 From the Times of South Africa:

An 18-year-old man on Indonesia's resort island of Bali claimed he was seduced by a cow after being caught having sex with the animal.

"He was caught by one of the residents standing naked while holding the back of the cow," Legawa said.

On Friday, Alit underwent a cleansing ritual in which he was bathed and the cow was drowned in the sea to rid the village of bad luck.

Alit said he did not see a cow but a beautiful young woman. "She called my name and seduced me, so I had sex with her," he said.

He had to pay 2,000 old coins as a traditional punishment while the village chief paid the owner of the cow 5 million rupiah (545 dollars) in compensation.

OK, I'm usually an advocate of placing blame on animals that have earned it instead of humans making excuses for them. And I'm not suggesting Alit should have been drowned as well. Still, the difference in penalties here does seem a bit harsh. Can't we find a middle ground?