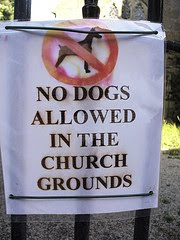 On the one hand, dogs will be dogs - biting, shooting and interfering with traffic:

-Another owner shot by his dog. So common it would hardly be worth mentioning, except for the nice touch that he was shot in the butt.

-An Australian Granny says it's the dog's fault that she was speeding at 164 km/hr (that's around 100 mph for us Americans).

- A police dog in Idaho has been returned to duty after an apparently unprovoked attack on a Schnauzer, despite it being his second offense.

On the other hand, some dogs have been more creative in their bad behavior lately. I was almost ready to give a prize for most original thinking to the dog who was caught having sex with a man in a dress on the grounds of a historic site in Britain.

But because it has more profound implications, I think this story beats that one: a dog caused a kerfuffle by receiving communion at a church in Toronto. One parishioner was so shocked that he filed a complaint and left the church. But, ominously, others didn't see this as a possible first step on a slippery slope, such as this church official:

"I think it was this natural reaction: here’s this dog, and he’s just looking up, and she’s giving the wafers to people and she just gave one to him,” said Needham. “Anybody might have done that. It’s not like she’s trying to create a revolution.”