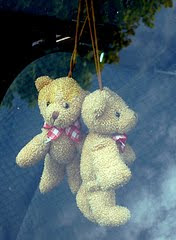 A grizzly that killed a camper near Yellowstone National Park this past week, convicted on the basis of DNA evidence, got the death penalty. The bear's cubs received a much lesser sentence of life in a zoo without parole.

However, this triumph of justice shouldn't distract us from the rash of lesser crimes committed by bears who have gone unpunished.

In Colorado, police received a call in the middle of the night about a car making a commotion, with the horn honking and something going on inside.

When the car's owners were awaked, they were surprised to find the vehicle missing from their driveway. They were even more surprised when they found that the thief was not human:

Somehow, the bear had either opened the unlocked back door or pushed a window down to get inside. Understandably agitated, it bumped into the horn repeatedly and eventually knocked the car's gear into neutral. The Toyota rolled down the hill. The door added to the bear's indignity by closing at some point during the ordeal.

Amazingly, three police authorities decided that the best thing to do was help the culprit escape. Being careful to take photos first, they tied a rope to the door and opened it from a safe distance. The bear thanked them in ways that will not surprise readers of this blog:

It left a foul-smelling "present" on the front seat.

The Toyota was trashed, with its air bags, seats and stereo torn to shreds. It's a total loss.

Don't be too quick to assume from those two stories that at least you're safe from bears inside your house. One family was fortunate to learn this lesson the easy way when a bear invaded their home for a meal and had second thoughts about abducting what he may have believed was a relative:

A New Hampshire mother said her two young sons learned an important lesson about leaving the outside door open after a black bear walked into their kitchen and ate two pears and a bunch of grapes and took a drink from the family fishbowl.

On its way out of the Laconia house, the real bear grabbed a stuffed bear, said resident Mary Beth Parkinson. The stuffed animal was found in the family's back yard, next to a box of Goldfish crackers.

Other animals were also fortunate not to suffer too badly from the family's lax security:

She said she arrived in time to save the fish.
"There was one fish left in here (and) one flipping on the counter," Parkinson said.

Photo of the only kind of bears that belong in a car by Flickr user Caro's Lines; cartoon via Houston Chronicle.