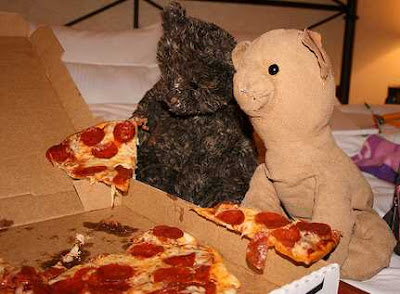 The bear problem continues across the nation. Last week, among other ursine crimes, we saw a black bear in New Hampshire that broke into a house and swiped some fruit, although it had second thoughts about the teddy bear it tried to liberate. But a bear in Montana has taken the problem to a new level. Nearly three weeks of widespread break-ins climaxed in this brazen attack:

Red Lodge resident Marek Rosin said he awoke last Thursday at about 1:30 a.m. when the bear pushed open the door to his back porch and began raiding his chest freezer.

"He was about four feet from me with his head in the freezer munching on a pizza," Rosin said. "It was almost comical if it wouldn’t have been that close."

Rosin scared the bear off before it could do any damage, other than to the one "supreme" pizza.

This has got to be stopped! It's one thing stealing our produce and stuffed toys, but frozen pizza is a different issue entirely.