Birds interfering with the American way of life 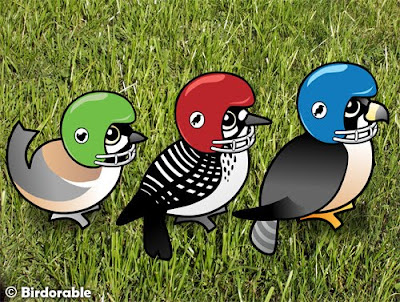 In Hawaii, an endangered seabird has put an end to a community's right to spend Friday evening watching their sons run around on a field crashing into each other and possibly risking brain damage.

The young of the Newell's shearwater apparently choose the middle of football season to fly from their nests to the ocean. Every year about thirty of them are disoriented by the bright lights of the football stadium and fall to their deaths. The Kauai Interscholastic Federation has been forced to move its high school football games to Saturday afternoons or risk a fine of $30,000 per dead bird.

You might think it's the same football game no matter what day it's played, but according to Hawaii News Now, this Friday night tradition is "practically sacred." One parent said:

"It's about bringing the community together, it's more than just a football game, it's a way of life."


And State Representative Jimmy Tokioka was quoted as saying, "to just go without having football games at night is really going to hurt the social fabric of our community."

If this really is all they've got, something has to be done about this tragedy, and maybe the culprits can be part of the solution. Who wants to volunteer to go to Hawaii and teach everyone how to go bird-watching?


Artist's vision of birds protected from football injury from Birdorable.