Plenty of room to swing a lizard 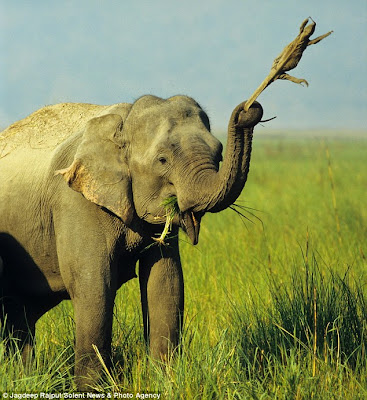 Elephants: I have concluded that they are the dolphins of the land. People are totally infatuated with them: they're so intelligent, they have amazing memories, they mourn their dead, blah blah blah.

Somehow we manage to ignore the inconvenient facts, such as highway robbery and alcohol abuse and drunken rampages.

And while elephants may have heartwarming relationships with their fellow elephants, watch out if you're NOT an elephant. Even leaving aside the humans they kill on their rampages - as well as the occasional zookeeper - they're not very nice to their fellow animals.

Take just one other species: there are reports of elephants serially murdering rhinos, as well as video of a male elephant, to put it delicately, sexually harrassing one.

And what's the elephant doing in that picture at the top of this post? In India this elephant captured this LIVE lizard, and for several days, tossed it and swung it around, sometimes dropping it and picking it back up.

The story reporting this incident says of elephants, "Some experts even believe the animal possesses an intuition that allows them to imagine what other elephants are feeling."

Thanks to the persistence of one lucky photographer, now the world knows that their empathy obviously doesn't extend to reptiles. That probably makes them about the same as the majority of humans, of course, but is that any excuse?

See more photos of this despicable animal cruelty at the Daily Mail.

Email ThisBlogThis!Share to TwitterShare to FacebookShare to Pinterest
Labels: elephant