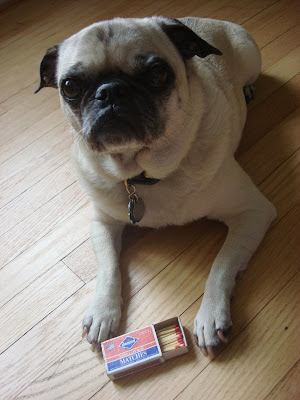 Despite feeling that animals should take responsibility for their bad behavior, I'm all for keeping my pets out of harm's way. But that's not our assignment here, so the press release for National Pet Fire Safety Day wasn't something I expected to be relevant to this blog.

Boy, was I wrong:

Of course, this isn't a complete surprise. Despite reports of dogs saving their owners from fires, we've also reported on dogs that start them. Cats are certainly not innocent of the same, and the fact that at least some of them then raise the alarm doesn't lessen the blame.

The AKC gives some advice on how to keep your pets from starting fires, but they seem to vastly underestimate the possibilities. Sure, it's a great idea not to have open flames around the house whether you have a pet or not. But removing or covering stove knobs wouldn't have helped the people whose goat knocked over a space heater or the ones whose alligator was suspected of doing the same

And don't think that just adding advice to be careful with those space heaters will eliminate the problem - ask the people whose fan outlet was blocked by a bird's nest. Nor will it do anything to prevent what can happen to people who are stupid about animals, like the man who set his house on fire while trying to kill a spider with a lighter.

So go ahead and cover those knobs, buy fake electric candles, and even be careful about giving your pets water in a glass bowl on a wooden deck.

But don't let those precautions give you a false sense of security, because - like the people whose dog started a fire by peeing on the vacuum cleaner - you never know what animals are going to come up with next.