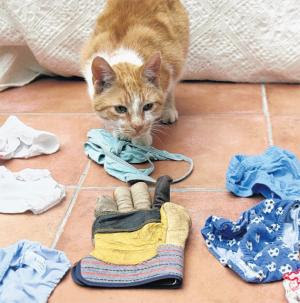 As we've seen again and again on this blog, not only aren't animals punished for bad behavior, they're often rewarded for it. And here we go again:

When Oscar the cat was being fostered by a perfectly lovely couple in Portswood, England, you'd think he'd have been on his best behavior to increase his chances of finding a nice permanent home. Instead, he went on an astonishing spree of thievery:

Earlier this week he brought home, one by one, ten pairs of children’s underpants.

At first Oscar brought home rather ragged items, but his foster family became concerned as he began to escalate to stealing nicer quality clothing and in particular women's underwear.

Worried about what the neighbors might think, they contacted the police. Exactly the right step to take, but did this lead to, say, an arrest? Was the cat sentenced to community service catching mice, even? Having had his crimes exposed, did he make any kind of restitution to his victims at all?

No! These cat-criminal-conspirators thought it was sufficient "to put their minds at rest that it’s only a cat pinching and not someone more unpleasant.” What's more, convinced that the items are meant as gifts, the couple has decided to reward the thief by giving him a permanent home:

Birgitt Weismantel, 56, who has been fostering Oscar from the Southampton Cats Protection charity since Christmas, said: “He brings them back as presents. We can’t give him back now as he makes such an effort with all these gifts... It was just so touching to see him come home every day with something for us."

Check out the original article at the Southern Daily Echo for video and the requisite "cat burglar" pun.