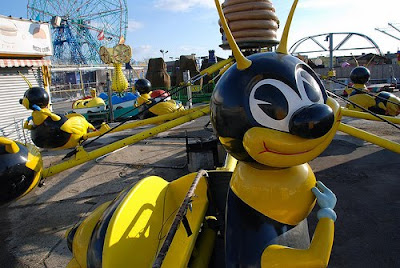 Coming up for air after spending the last month or so in a push to meet my book deadline, even I am a bit shocked at what animals have been getting away with when they think my attention is diverted.

I don't blame them for upping their efforts. They only have till next fall before the lid is blown off their activities in a full length expose by a major New York publisher. They should, after all, be quaking in their paws.

In the meantime, unfortunately, clueless humans are continuing to both enable and be surprised by their bad behavior, like the urban beekeepers in Brooklyn who were astonished to find that their bees were producing honey that was bright red instead of amber.

Another strange new bee disease? No: it's simply that if you're going to bring bees into the city, of course they're going to take advantage of urban amenities.

We've already seen that bees love alcohol even more than college students do. Scientists have also found that given the choice, bees prefer nectar that is spiked with caffeine and nicotine. And we know that animals can become junk food junkies.

So readers of this blog won't be surprised at the solution to the Mystery of the Red Honey in Red Hook: apparently the bees have been dining on the syrup at a local maraschino cherry factory.

Of course, naive nature-lovers who don't read this blog were incredulous, as reported by the New York Times:

“I didn’t want to believe it,” said Ms. Mayo, a soft-spoken young woman who has long been active in the slow-food movement. She found it particularly hard to believe that the bees would travel all the way from Governors Island to gorge themselves on junk food. “Why would they go to the cherry factory,” she said, “when there’s a lot for them to forage right there on the farm?”

I guess you have to expect this kind of delusional thinking from someone who not only has the usual ignorance about the real nature of animals, but is also an advocate of "slow food." But seriously, get real. How many hungry humans are digging up dandelion roots in Prospect Park instead of making reservations at one of Brooklyn's many fine dining establishments - or grabbing a Twinkie at the corner bodega? Why do you expect bees to work any harder?

Email ThisBlogThis!Share to TwitterShare to FacebookShare to Pinterest
Labels: bee