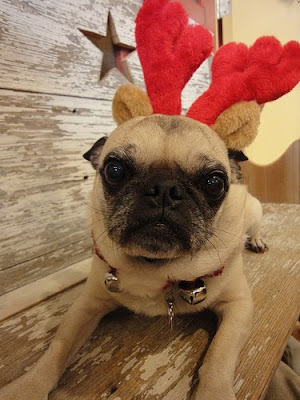 Few animals can boast of a more positive reputation than reindeer. Sure, pandas have good publicity year-round. But it's hard to compete with an animal that has a gig like this one. It's a brilliant strategy: Get the kid when he's way too young to have any critical thinking skills and can be fooled into believing that quadrupeds without wings can fly. Then make up a story that they're critical to the delivery of those precious holiday presents. So even when he doesn't believe in Santa anymore, he's left with a warm fuzzy feeling about these animals for the rest of his life.

So you might think the only danger associated with these deer is that they have an inside track to letting Santa know that you've been naughty. But a woman in Scotland who had a narrow escape can tell you differently.

As reported by The Telegraph, she was taking a hike in the area where Britain's only reindeer herd lives, a tourist attraction introduced in the 1950s, when a buck knocked her on her back:

"One of my walking poles was thrown into the air. The reindeer kept trying to stick its antlers into me but I managed to brace my feet on them.

"I began bashing it over the head with my other walking pole. Its antlers were pretty big and it had one sticking straight out in front.

"I couldn't believe what was happening, and I was aware that I was running out of strength. I was shouting for help but there was no-one there.

"I couldn't keep it at bay any longer and collapsed in a heap with my rucksack protecting my back. I tried to get up with my back to the reindeer but it got an antler under the strap of my rucksack and pulled me over backwards.

"It was behind me and its antlers were sticking forward either side of me. I grabbed them to try and avoid getting stabbed and it started to bump me along the ground. Eventually, I fell and landed in a heap."

She said she realised that if she lay still it stopped attacking but she was knocked over again as she tried to make her way downhill and only reached safety when she managed to climb over a fence.

By then she had walked more than two miles and descended 1,200ft while throwing parts of her packed lunch to distract the reindeer.

So if you still believe in leaving cookies and milk out for Santa, don't forget to leave something for his draft animals as well - you may get a lot worse than coal in your stocking if you get them mad at you.

(And also watch out for pugs forced to dress as Santa's crew who are mad enough about it to bite you.)