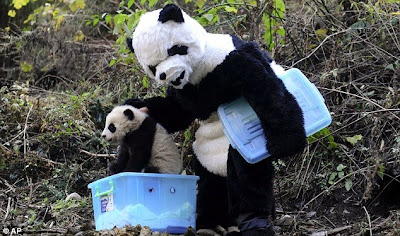 Pandas: Don't get me started on pandas. Now, I actually agree that humans should feel guilty about driving so many species to extinction, and we should do something about it. But we have to pick our battles. Millions of dollars and years of research have been spent trying to get reluctant pandas to breed in captivity. How many more-cooperative species could have been saved with that expense and effort?

They claim that it's important that the cubs not get used to the sight of humans. Which could well be correct, but for this solution to work, we have to assume that pandas cannot tell the difference between another panda and a human in a panda suit:

3. By how it behaves, for example:

-taking its head off: 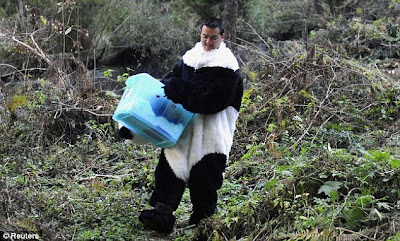 And if all this is true, seriously, should we really be knocking ourselves out to save an animal that is that dumb?

Email ThisBlogThis!Share to TwitterShare to FacebookShare to Pinterest
Labels: panda