Dog fought the law... and the dog won 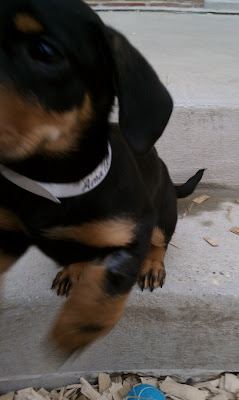 In a legal setback in the battle against bad small dogs, a Mississippi appeals court recently overturned a decision awarding $130,000 to a woman who was almost attacked by a four-month-old, four-pound dachshund puppy called Sophie.

The basic facts of the case of Penny Pinchers vs Outlaw (I am not making that up) as reported by legal blogger Philip Thomas:

Sophie's owner took her to work with her at Penny Pinchers. The rest is history. Outlaw—being afraid of dogs—ran for the back of the store upon entering and hearing Sophie bark. Outlaw could hear Sophie's claws on the floor and, I presume, her jaws snapping.

When Outlaw saw it was little Sophie, she laughed and resumed shopping. Large quantities of catfish and sugar were on her list. But Outlaw was soon hysterical with pain in her bum hip. An ambulance was dispatched. The lawsuit followed.

The appeals court concluded that Outlaw had not proven that the presence of the dachshund met the standard for a "dangerous condition" that Penny Pinchers could be legally responsible for, and notes that "we must consider that Sophie was a four pound puppy at the time of the incident."

Apparently the Mississippi judge hasn't read my post on the study that says that dachshunds are one of the breeds most likely to bite. The only reason we're safe from these monsters is that they tend to pick on victims their own size: they've been known to maul babies, and in some cases (reported here and here), dachshund attacks on infants have been fatal.

And they may have more than babies in the sights. Let's not forget the cases where other cute small dogs have tried to consume their owners bit by bit.

That photo is the last thing you'll see if you die by dachshund puppy attack. Don't underestimate them because they're little... especially now that they have the law on their side.