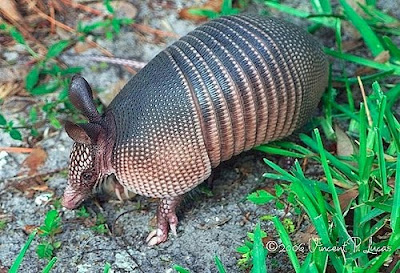 OK, I haven't run across a story of murderous capybaras yet. But we've got breaking news that rounds out the evil lurking in my favorite family.

You'd never guess they are relatives, but anteaters and sloths are both members of a group called xenarthrans.

We've already seen those adorable critters committing birdicide and diving into poop.Now it's been discovered that the third member of the family, the armadillo, is making us sick.

Armadillos had previously been considered good guys in the story of leprosy.Because they are susceptible to it, they could be used in research to study the disease.

But now, genetic analysis reveals that about 1/3 of the cases of leprosy in the US each year originate from armadillos.

Now, on the bright side, this is only true of the nine-banded armadillo, which is not the cutest one: so far we're still safe from the adorable three-banded: 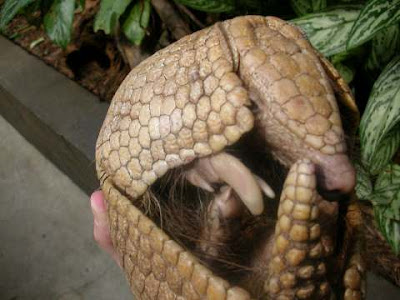 And despite the traditional terror associated with leprosy, it's not as big a deal in modern as in Biblical times. If caught early, it can be cured with antibiotics. And it's not actually that contagious - transmission requires extended, close contact. So the only people at risk are the ones that cuddle armadillos - or eat them.

But I know - I'm just making excuses. If you're also still not convinced, don't miss this video of a vicious attack.

First photo by Flickr user Leppyone, who adds to the problem by making that animal look so artistic.

Email ThisBlogThis!Share to TwitterShare to FacebookShare to Pinterest
Labels: armadillo