Not safe in our own homes 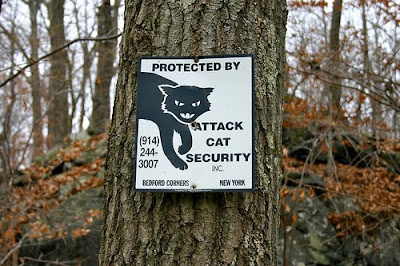 A home invasion committed by a feral cat resulted in an attack so bad that Texas resident Charles Gibson needed to be airlifted to a hospital:

It was around 1 p.m. when investigators said Gibson came home and found a 20-pound tabby standing in the middle of his living room staring back at him. Scared, police said, the man grabbed a knife to try to protect himself.

But seconds later, the feral cat attacked him in the bathroom, authorities said.

Gibson admitted he stabbed the cat multiple times, but could not remember anything else.

When medics arrived, he was bleeding profusely and was rushed to the hospital.

If you've got a strong stomach you can watch a news video with a quick view of one of his stitched-up injuries here. At the time of that report, Gibson was home, but it's not over - doctors said he would need additional surgery.

According to the video, the cat got in because the front door was left open. Think you live in a neighborhood that's safe enough to leave your doors unlocked? Maybe you should reconsider.


Photo by Flickr user sonjalovas. I don't know what I think about that company's logo - I wouldn't be so sure that cat's on my side.

Email ThisBlogThis!Share to TwitterShare to FacebookShare to Pinterest
Labels: cat