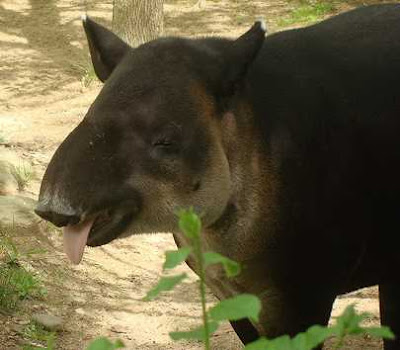 OK, we've done sloths and wombats and anteaters, and today, I will continue to try to be a role model by reporting on the misdeeds of my own personal favorite animals.

Yesterday was World Tapir Day, dedicated to raising awareness of the four little-known and apparently perfectly charming species of tapir.

If you don't know what a tapir is, please don't walk up to their exhibit at the zoo and say "Look at the anteater!" For the love of God, read the sign, OK? It's not a pig, either. In fact, their closest relatives are horses and rhinos, which just shows what you know.

So now that your awareness is raised and the tapir has had its day, let's give equal time to the dark side. You may not think that this mild-mannered looking herbivore with the adorable squishy nose is a dangerous animal, but you'd be wrong there too.

At the website of the IUCN's Tapir Specialist Group, you can read a first person description of an attack by a tapir in the wild. Tapirs are usually elusive in their natural habitat, and it's a good thing, because here's what happens when you get too close to their babies:

I turned around and ran, but in less than 5 meters she caught up with me. She pushed me to the ground and began biting me. The first bite was on my rubber boot and the next four bites were to my backpack (which saved my life!). All along I was playing dead, like an opossum, until I felt the tapir was trying to bite me in the back of my neck. At that moment, I ran on all four limbs and jumped into a dry rocky creek. I hit many rocks and fallen branches and landed hard on one side of my body. I lost consciousness and when I came to, probably an hour later, I was walking in the forest very confused and in a lot of pain. I remembered everything that happened to me and realized that I was very lucky to have survived, because this animal was furious and her strength was incredible.

And don't think you're any less at risk when the tapir is safely behind bars. In 1998, a zookeeper lost her arm to a tapir. You may wonder, what offense was she committing against this animal at the time? Well, she was trying to feed it.

What's more, the subject of the attack above was Carlos Manuel Rodríguez Echandi, the former Costa Rican Minister of Environment and Energy, described by the Tapir Specialist Group as a "highly acclaimed conservationist," who was on a visit to the forest to try to solve the poaching problem.

Email ThisBlogThis!Share to TwitterShare to FacebookShare to Pinterest
Labels: tapir