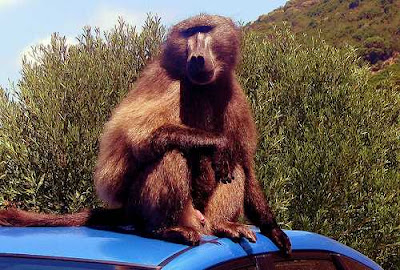 Fred, the baboon in South Africa who learned how to break into cars to steal food, is no more.

Fred was captured and executed by lethal injection when officials decided that he had become a danger to humans. The official explanation reported in the news read in part:

This baboon’s aggression levels had recently escalated to the point where the safety of tourists, motorists and other travellers along the road past Smitswinkel Bay was being threatened. In 2010 he physically attacked and injured three people, of which two required medical attention

The decision was not without controversy, with some locals attempting to win a reprieve till the last minute. As we have seen time and again, there were those who made excuses for Fred's bad behavior, putting the blame on tourists for feeding and encouraging the baboons. One local photographer was interviewed by The Telegraph:

"The problem here was not Fred or any other baboon that can open car doors or house windows – the problem was the people," he said reportedly.

Despite these passionate defenses, it seems undeniable that Fred had a role in his own problems. If tourists are handing out food, a monkey could just take it politely and be glad to have it. This blog does not condone the death penalty - if nothing else, it seems unlikely to be successful as a deterrent - but there was no reason that Fred's response to generosity had to involve breaking into cars and attacking people.

Rest in peace, Fred, and let us hope that your sacrifice serves as an example to your fellows: If people think it's cute to give you food, recognize that you've got a good gig. Don't push it, because when humans turn against you, they don't mess around.

Fred has been memorialized in his own Wikipedia entry and elsewhere, such as by photographer of the above, Flickr user vgh.media.