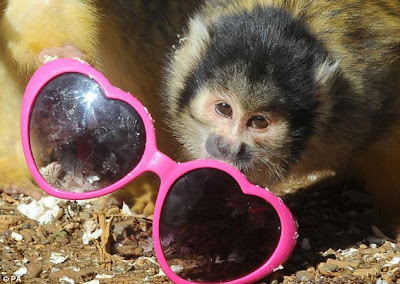 A couple of weeks ago we learned of a drive-though zoo where the monkeys had long enjoyed vandalizing vistor's cars. Two years of construction had deprived them of this pleasure, and should have been a good opportunity to break them of the habit. Instead, when the exhibit re-opened, keepers gave the monkeys their own car to demolish in celebration.

In defense of my former profession, not all animal keepers are like this, and today we meet some better role models for how to treat bad animals.

At the London Zoo, there's a walk-through exhibit of Bolivian squirrel monkeys. When it opened in 2005, the zoo proclaimed:

Our revolutionary new enclosure is the result of extensive research into what visitors really want from a modern zoo, and allows them to actually get in with the monkeys and observe them in their natural habitat.

If what visitors really want from a modern zoo is to get in with the monkeys, they're asking for trouble, as anyone who reads this blog knows. Because what you will then have to contend with is, what do monkeys really want?

The answer is never a good one. We've seen them stealing from cars, decimating vineyards, and repeatedly attacking innocent citizens, just to name a few cases.

And people who get up close on purpose usually end up sorry, even when it's a monkey they know personally.

This exhibit provides further proof of the folly of mixing too closely with our fellow primates, although no bloodshed has been involved, at least. The monkeys have taken to stealing visitor's sunglasses, and have accumulated a stash of seven pairs.

This should be no surprise: for one thing, it's not the first case we've seen of an eyewear-thieving monkey. For another, these same monkeys caused a problem a few years ago when they had to be trained to stop stealing visitors' cell phones.

And fortunately, staff are taking action again: they're providing decoy sunglasses coated with bitter apple, hoping the nasty taste will turn the monkeys off the shiny toys.

But you know, now that I think of it, I am having second thoughts about this approach. If the public is foolish enough to want to get up close and personal with monkeys, maybe we should butt out and let them see what monkeys are really like.