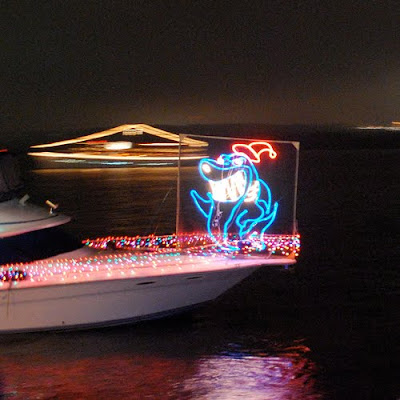 Last week we saw snakes and a ferret travelling by train and a penguin overcoming its flightless nature via airline. And while last week's monkeys used their car as a toy rather than a means of transportation, we've seen bears and dogs try to drive cars more than once.

Is no form of transportation safe from animals? Apparently not, since we've recently seen a rash of sea life getting on boats.

In Texas, some fisherman who were after nothing more than red snapper ending up coming home with a 375 pound mako shark that jumped into their boat. The shark, perhaps having second thoughts about its choice of conveyance, thrashed around so wildly that they were unable to help it back into the water, and it died.

Although the men had no permit to catch sharks, officials reasonably concluded that no offense is committed when a shark commits suicide using your boat.

A more serious case occurred a few days earlier when an eagle ray jumped into a boat on the Florida Keys. This fish seemed more intent on murder than suicide: it landed on a woman passenger and slammed her against the deck repeatedly.

The ray was reportedly 8 feet across and probably 300 pounds, and the other passengers thought the woman was going to die. It wouldn't have been the first time - a woman died of head injuries in a similar incident in 2008.

Nearby wildlife officers heard the commotion and rushed to the boat - "shoes were getting thrown off the boat, towels were going everywhere," one told CNN. But by the time they got there, the victim had freed herself, completely uninjured. So their only contribution? Helping the culprit escape back into the water. Thanks, guys - good to know whose side you're on.


The only kind of shark that belongs on a boat by Flickr user MV Jantzen.