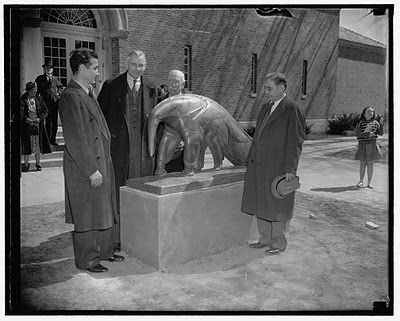 Even after several years of blogging about the misdeeds of animals, even after researching and writing a book on the subject that will appear later this year, there are certain animals that I retain a soft spot for.

You would think I would know better, but it still inexplicably pains me to post a story about sloths diving into sewers or a wombat attacking a man in a battle to the death.

Another of my favorites has managed to escape notice on this blog so far. I once worked in the building in the photo above, in front of which a giant anteater is honored. I once slaved over this adorable lesser anteater, or tamandua. Look how cute it is sniffing my shoe! 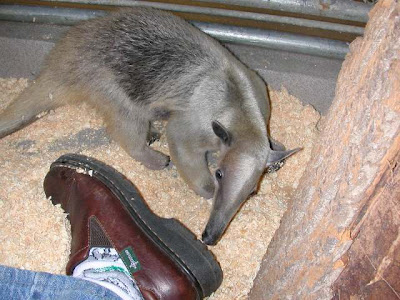 And despite having escaped from that servitude, more recently, I admit it, I have been known to forward adorable baby anteater photos around the internet: 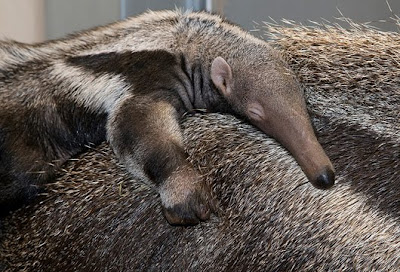 But I understand that despite my weaknesses I have a job to do, and in that spirit, it would be wrong to pass up the following headline:

A flock of ten flamingoes have met a brutal end at a zoo in Eskilstuna in eastern Sweden after a curious anteater broke into their compound and clawed them to death, leaving a further five birds nursing injuries.

"It is not as dramatic as it sounds. The anteater panicked when the birds cackled and flapped their wings and it struck back," Helena Olsson at the Parken Zoo told The Local on Tuesday.

"The anteater is not a meat-eater, unless you consider ants meat, but when it feels threatened, it will defend itself," she said.

Olsson said that the South American animal, whose claws she said are strong enough to damage concrete, became curious and managed to pull apart the fence separating their pens and enter the enclosure holding the long-legged birds.

"The birds are very frail and the anteater is very strong," she said.

"Not dramatic" unless you were the victims. And when an animal has claws that can damage concrete, you don't need to be a frail, pink bird to be at risk. Perhaps Ms Olsson is unfamiliar with a past story that I confess I have been sitting on, with the excuse that it is too old to be news: in 2007, a 19 year old zookeeper in Argentina actually died after being attacked by an anteater.

I guess now I'm just waiting for the inevitable news story where a pack of pugs eats its owners alive. We can only hope that I don't let down my guard to the extent that I'm the subject of that story myself.

Historic photo courtesy of Circus No Spin Zone. Check out some of his more amusing insights into bad animals here and here.

Email ThisBlogThis!Share to TwitterShare to FacebookShare to Pinterest
Labels: anteater